I have to tell you that for two weeks now, I have felt like a yo yo with all the rain and storms we've had, it's been like this... Close the tenting, an hour later open the tenting, another hour and close
the tenting, then open the tenting, open, close, open, close. Yada yada...  But everything has sprouted and the plastic tenting is working it's magic. The first to come up was the onions, (all of them, red, yellow, white and green), then came the radishes, the lettuce and now everything! This is my favorite part. It's exciting to watch!

The only starter plants I used where the tomatoes and the strawberries. Everything else was direct planted seed. I even planted some of the strawberries in the sides of some of the bales. You're supposed to sow several crops over the growing season. As these mature and are harvested, you plant new ones until your weather won't let you anymore.

Okay. I'm gonna tell on myself. I have a little roll-along garden cart with a seat on top and I was sitting on it while I was planting, moving right along from bale to bale. Well... because I'm planting on an incline, and I wasn't exactly in the middle of the thing when I lifted my foot to move over, I popped a wheelie and dumped myself right off the back of it! LOL!! So my advice is when working on a hill, be careful with anything on wheels.

And then as if that weren't enough... I planted a separate little garden bed of Mint and Sunflowers!

Here are some pictures of the progress.


The end of the day after everything was planted! 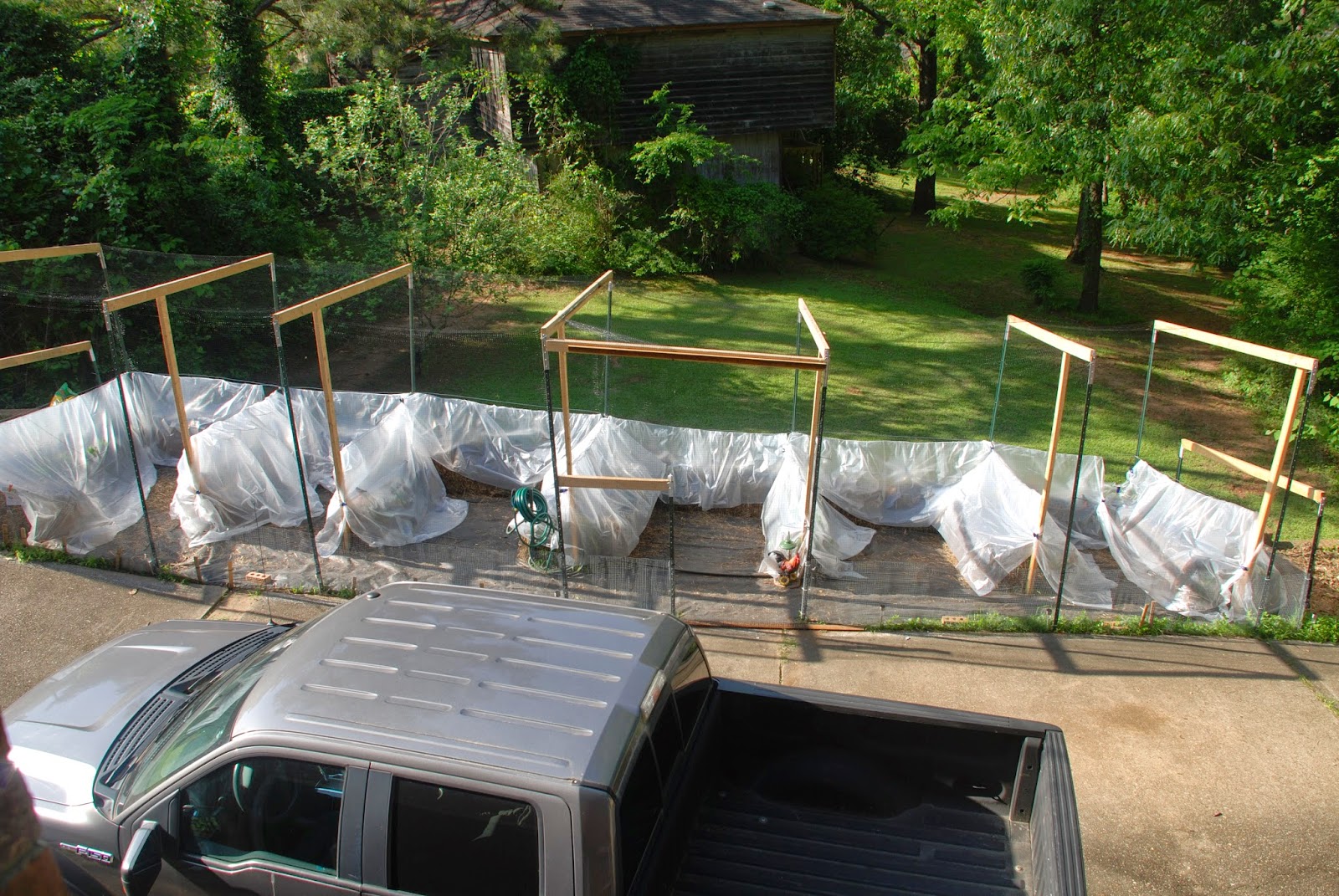 The next morning, before the rains came. 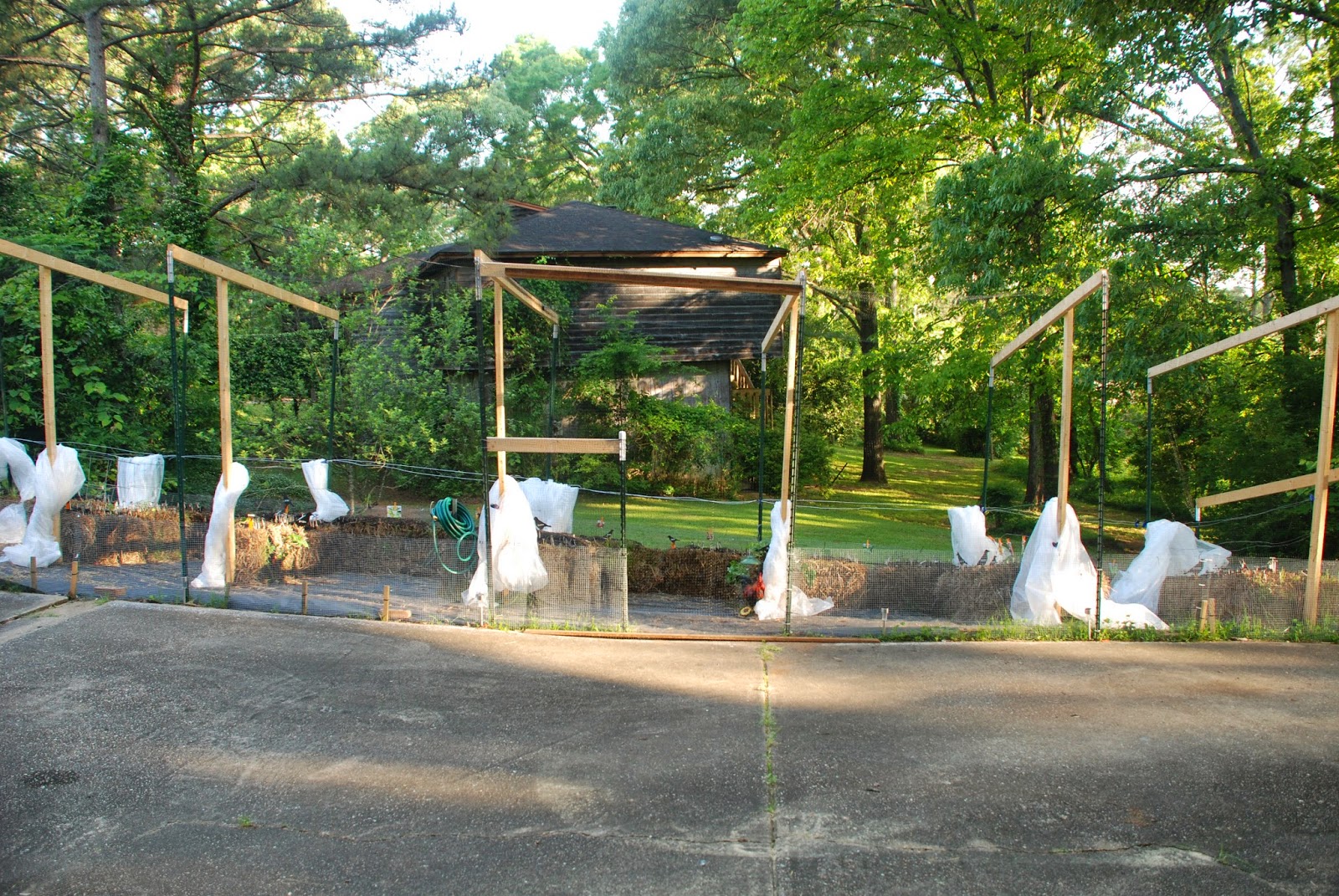 Day 4 the radishes rise from the potting mix! Yahoo!! 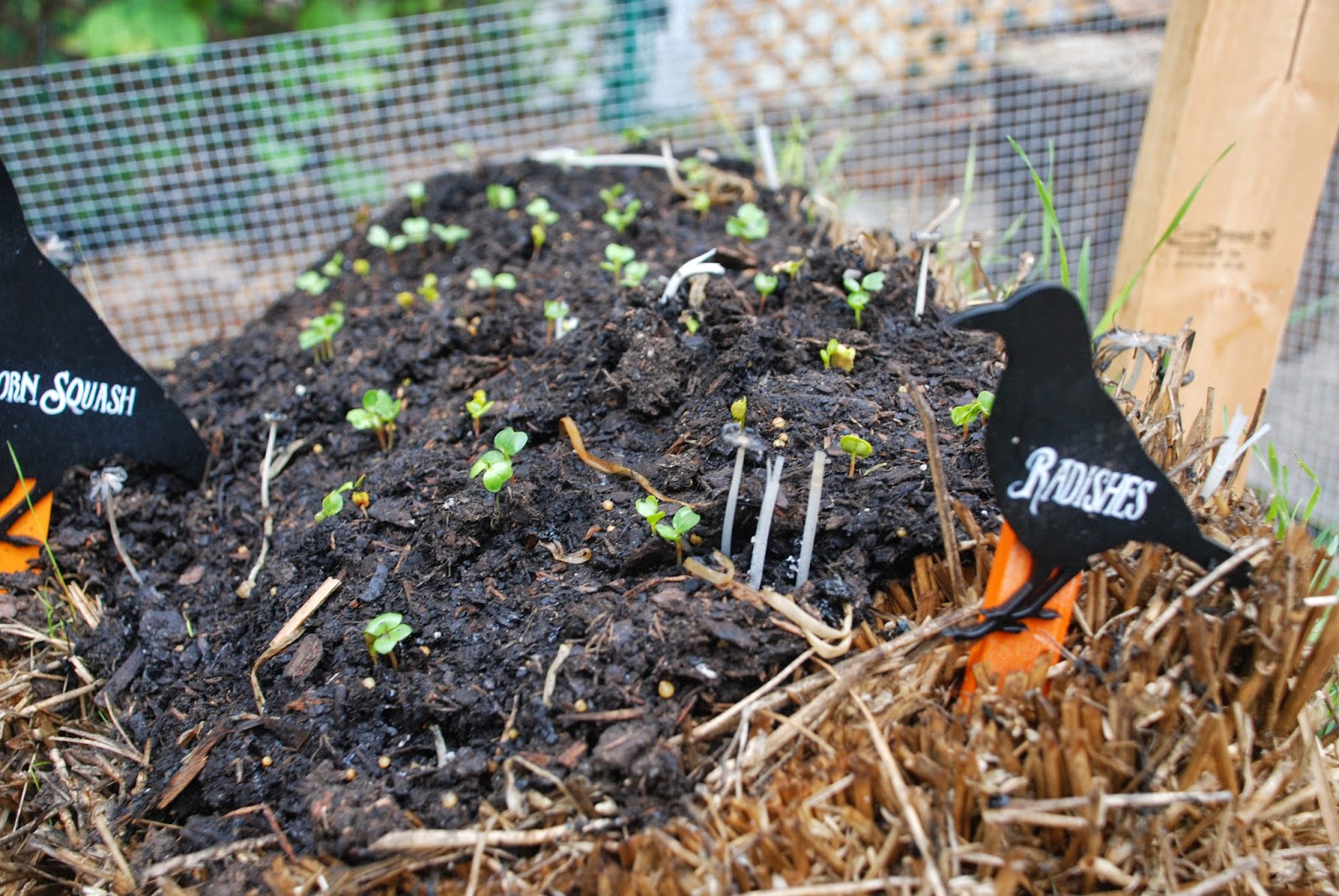 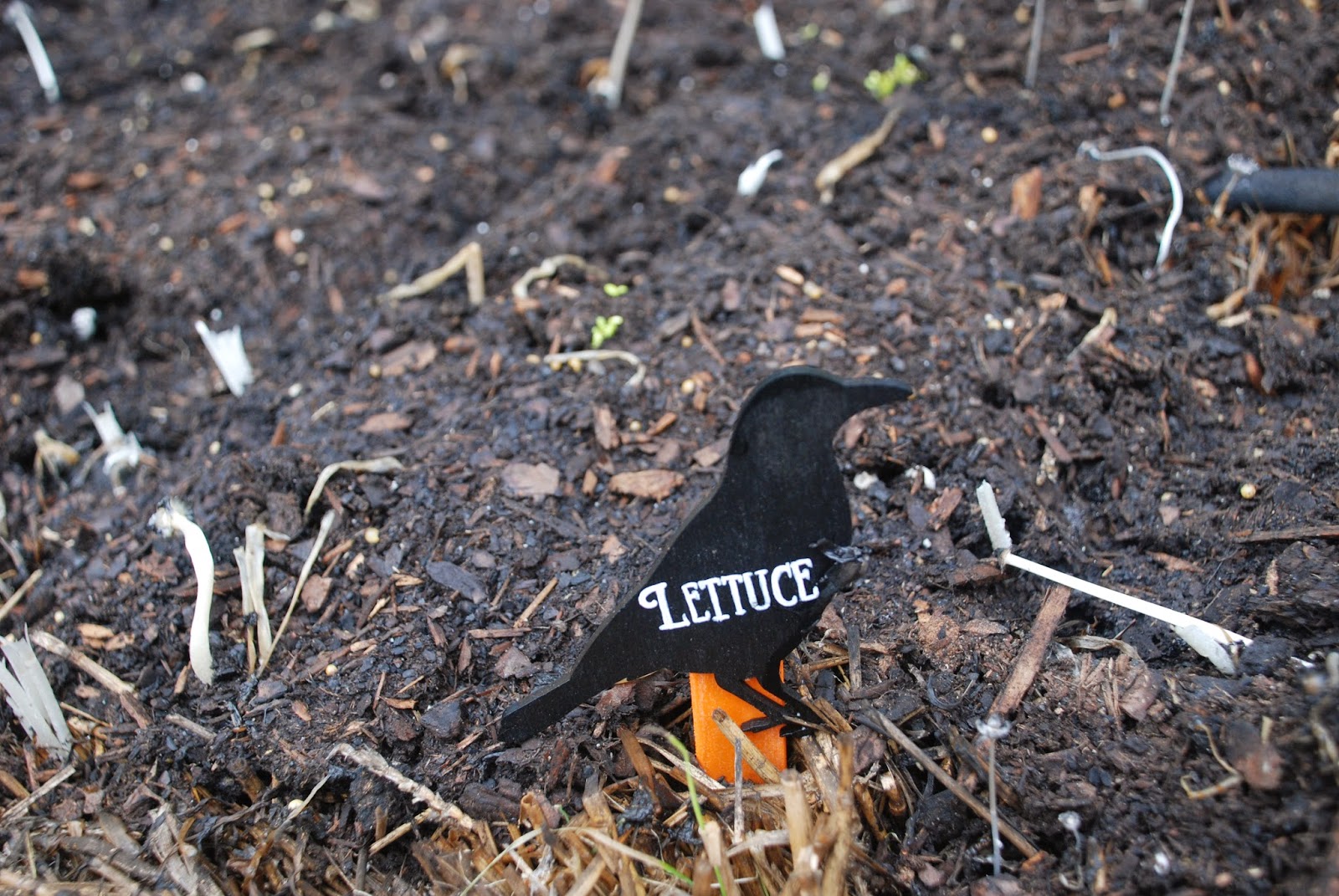 And the onions. How do you like my crow garden stakes? 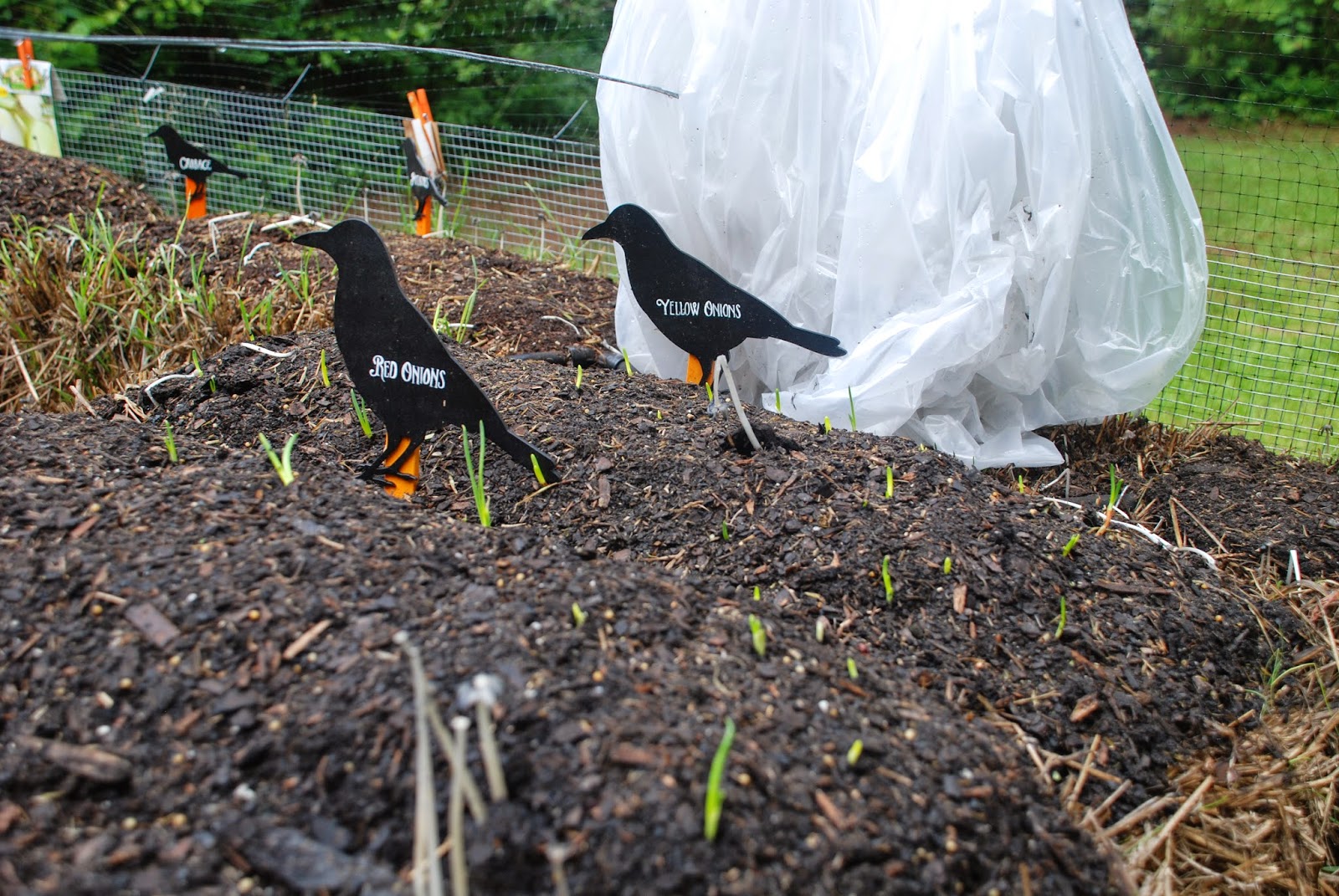 The strawberries planted on top and on the sides. 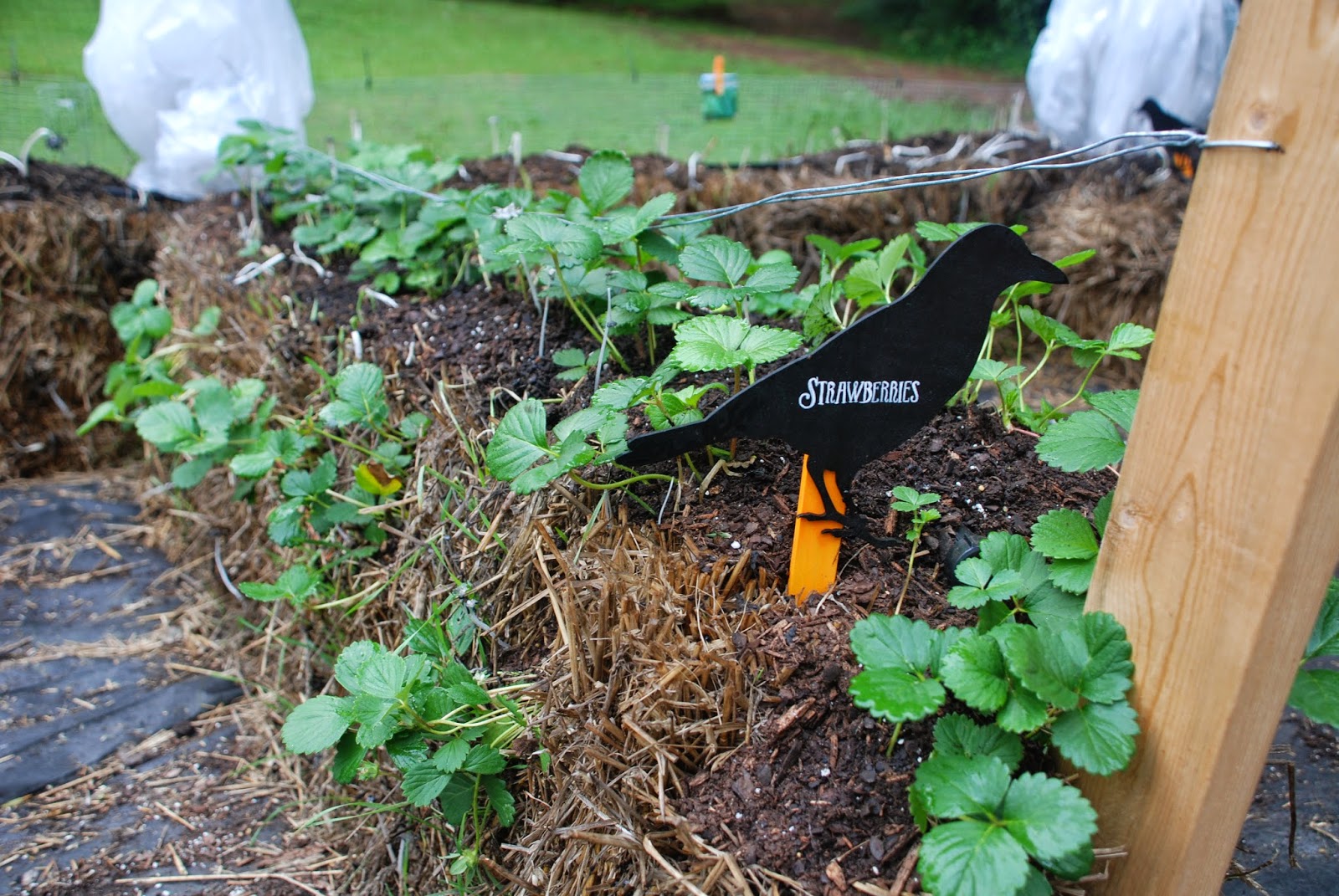 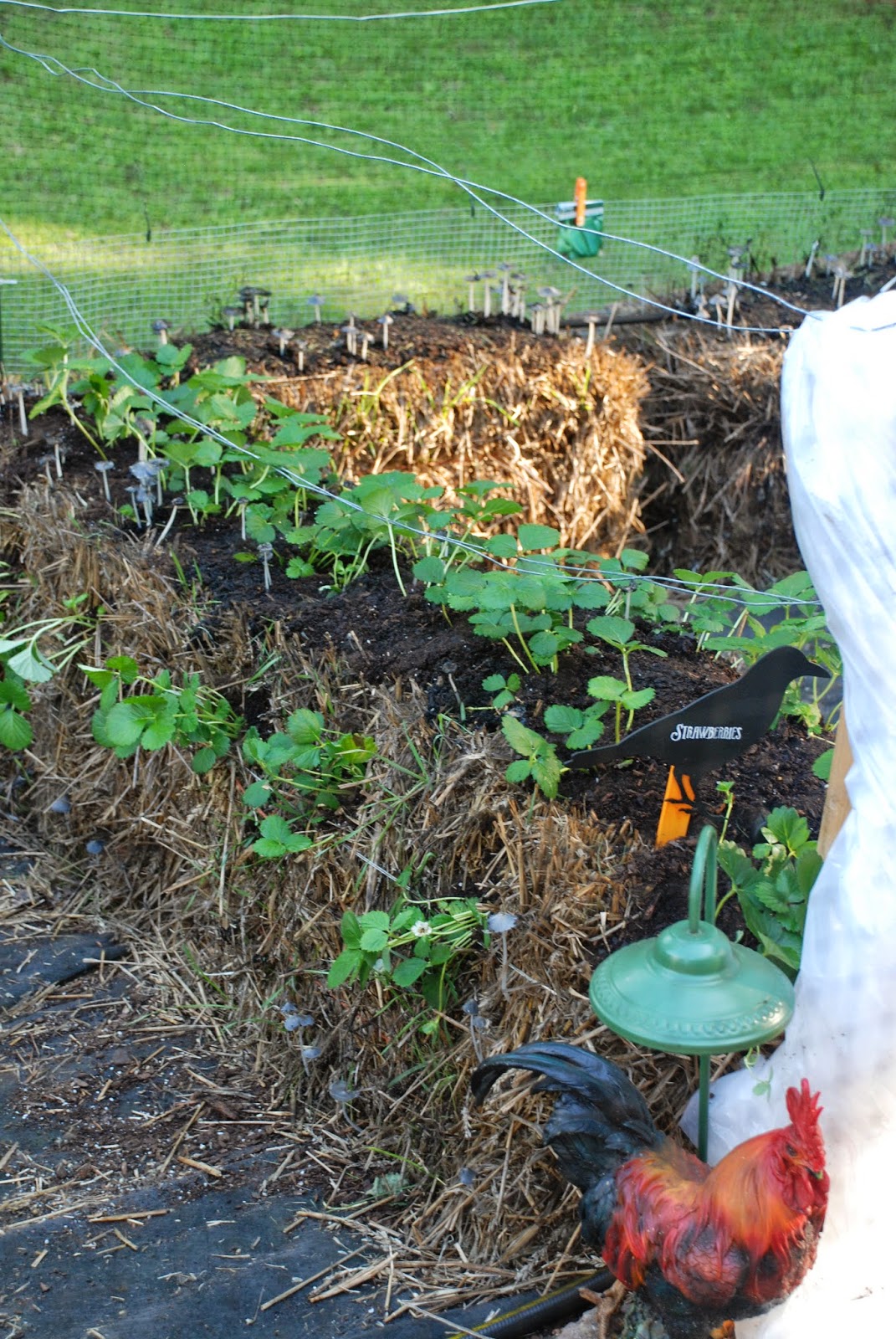 On the rainy days you can see top the netting pretty good. 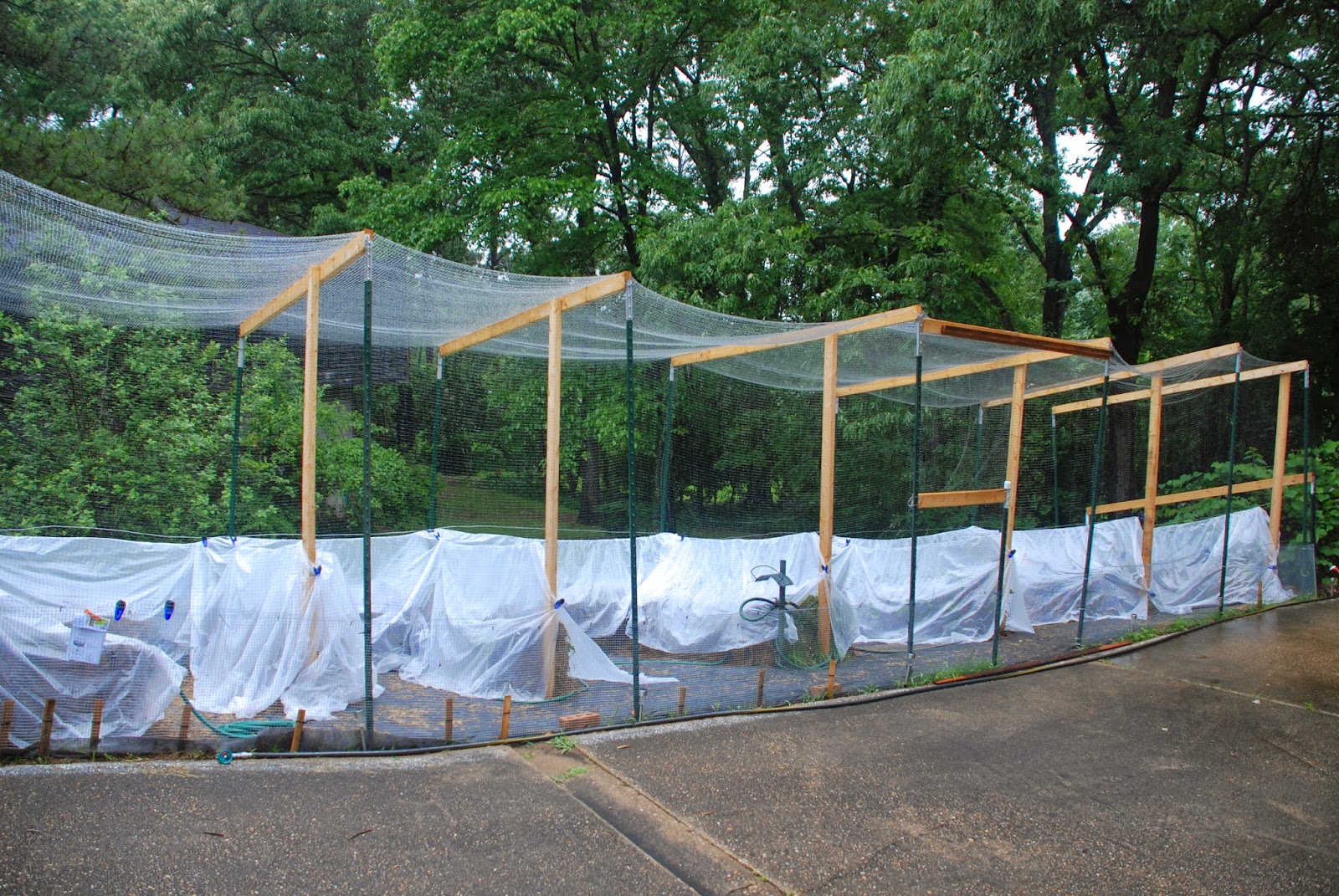 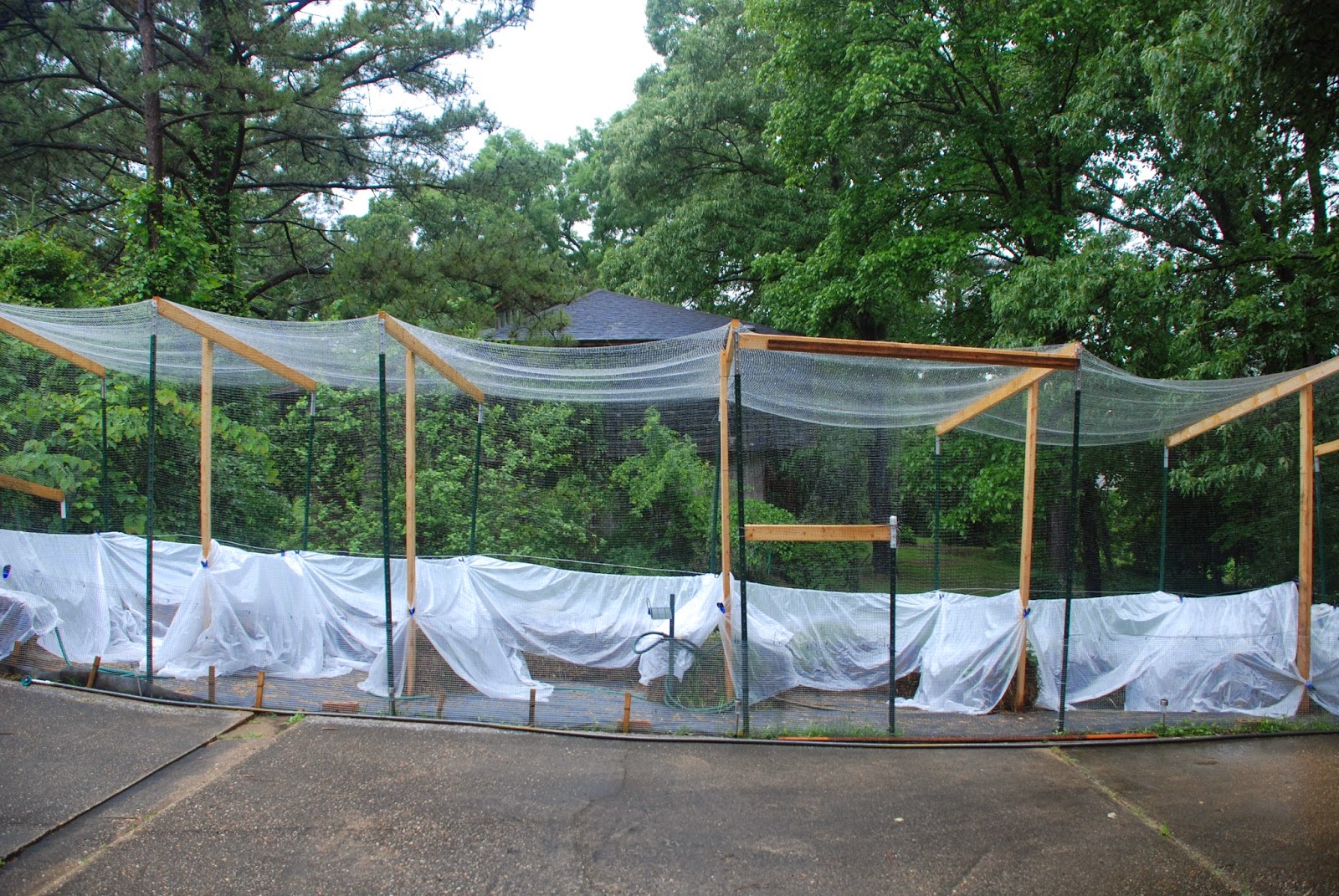 
Posted by debbie@autumnaire.com No comments: Links to this post

Okay, I put in the support boards. These go at the end of each row of bales. They not only help keep the bales in line, they hold your vine wires in place as your plants grow. I drilled mine every 10 inches up the board, starting about 10 inches above the top of the bale. I threaded the vine wire on the first or bottom two rows with doubled wire. You put the plastic sheeting between the two wires and this keeps a good wind from blowing it off your bale. The plastic sheeting is used to protect the plants while there is a chance of cold temperatures or hard rains. It also helps in the germination process of the seeds.

Today the soaker hoses went in. It was way easier than I thought it was going to be. I got a kit at Lowe's that included all the little parts and pieces that are needed. I cut 20" pieces of wire and bent them in half to make stakes to hold the hoses in place. Everything was tested and works great!
The bales have been completely conditioned and the internal temperatures are not so hot that I cook the plants. According to the book we are ready to plant. Tomorrow the bird netting goes up and the plastic tenting goes on. And maybe some more rows of vine wire.

I think I’ll get to start planting seeds on Wednesday!

Here are some of the progress photos.

The support poles that the wire attaches to. And you can see my soaker hose layout. We have lots of mushrooms sprouting up right now, but they just knock over and won't bother the plants. 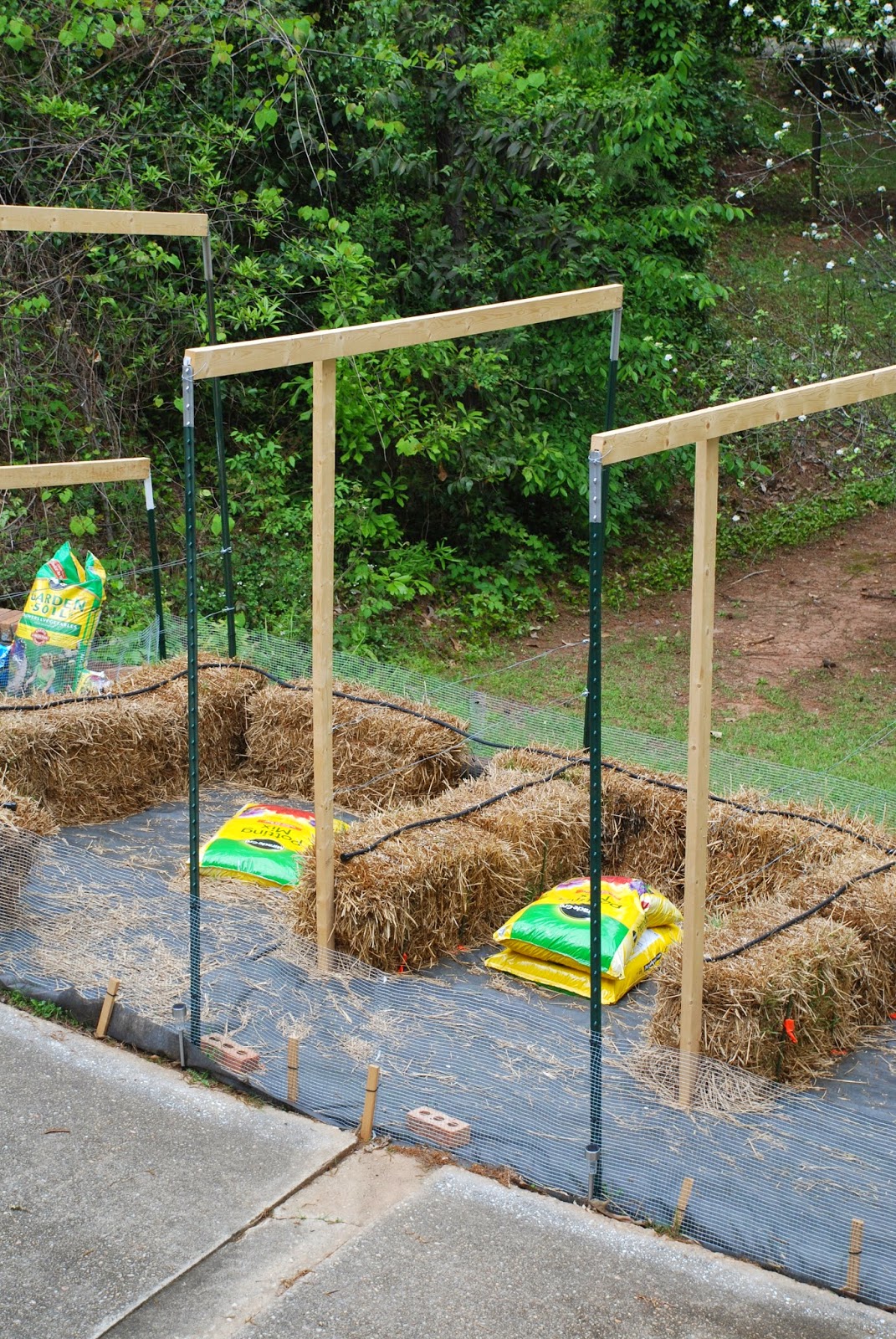 You can barely see the double rows of vine wire.
I have a bunch more wiring to do, so I'll show those again in an update. 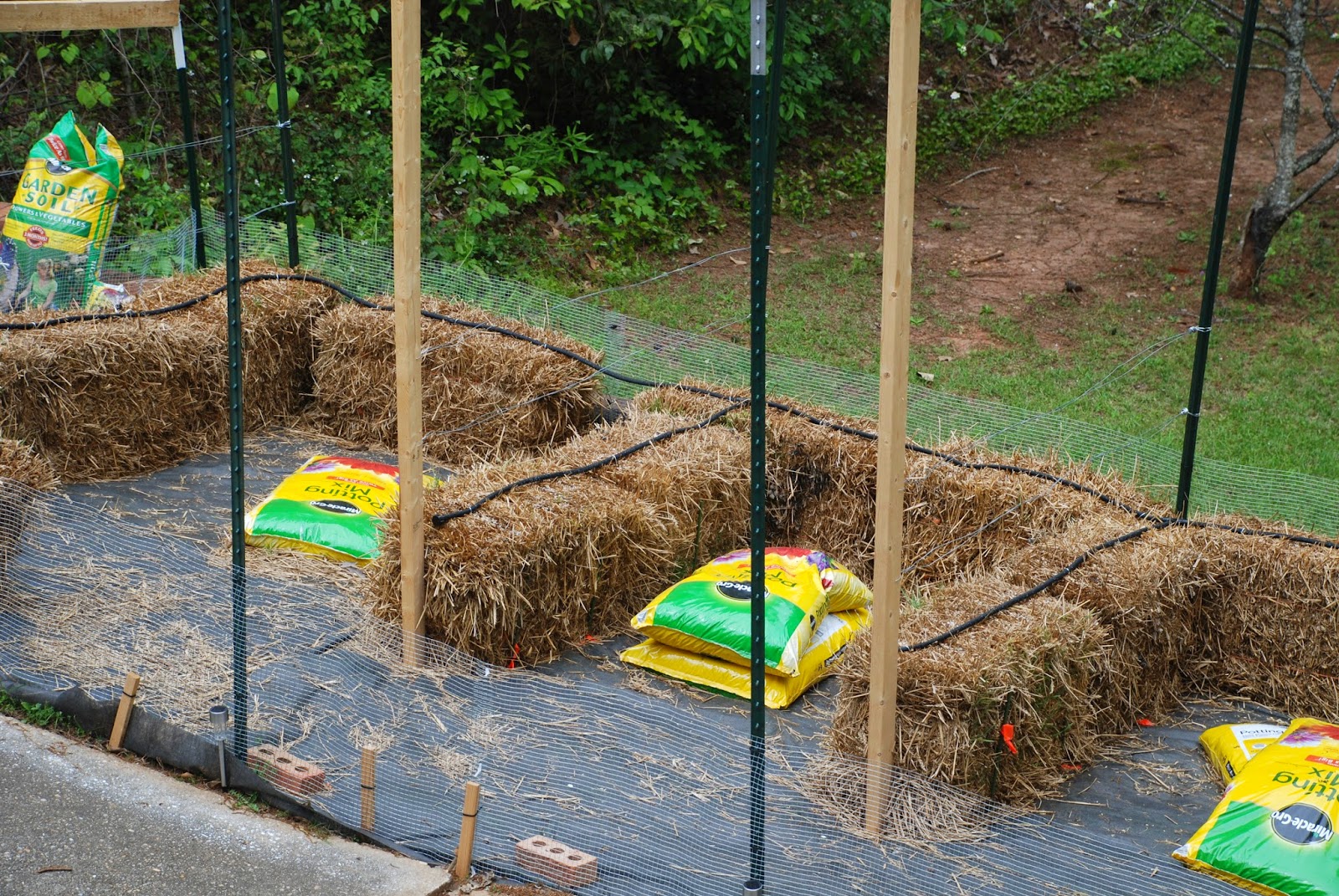 A view from my kitchen window. You can see I have some plants on standby.
That is two different kinds of mint and they will all be planted in the sides of the bales.
Did I mention before that you can plant in the sides of the bales also? Well, you can.
I also bought a Meyer Lemon tree.
No, I'm not planting the tree in a bale, but I want several dwarf trees to have around for the fruit,
so I'll plant them in large pots so that the size of the trees stay manageable. 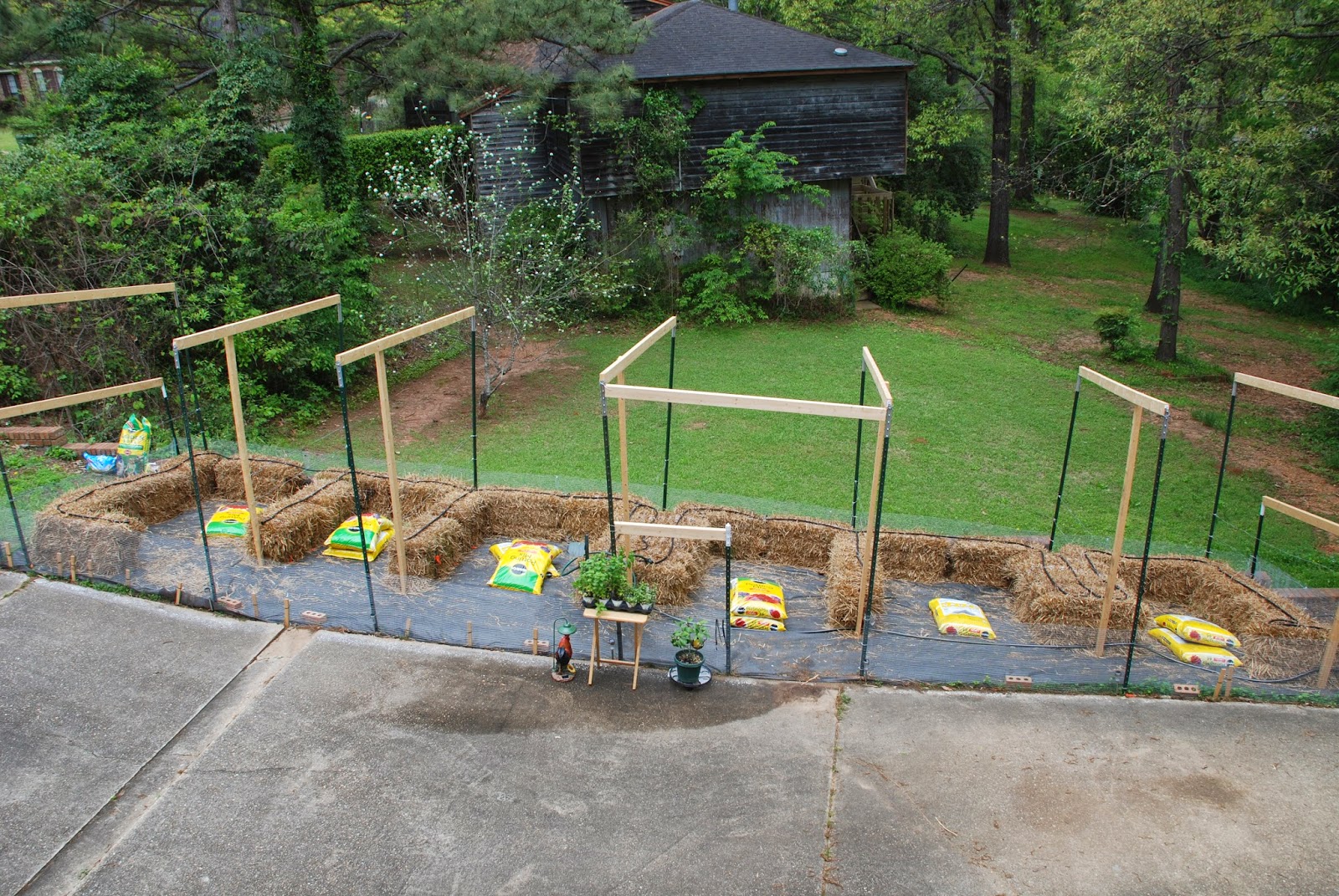 I intend to build a "Lemonade Stand" to have out there just to add to the "FUN" of it all!

Oh, I almost forgot! I made some fun garden stakes by putting together laser cut outs with cut pine stakes. I sealed everything so hopefully they hold up to the weather. Check these out!
I made a whole bowl full for everything I intend to plant. 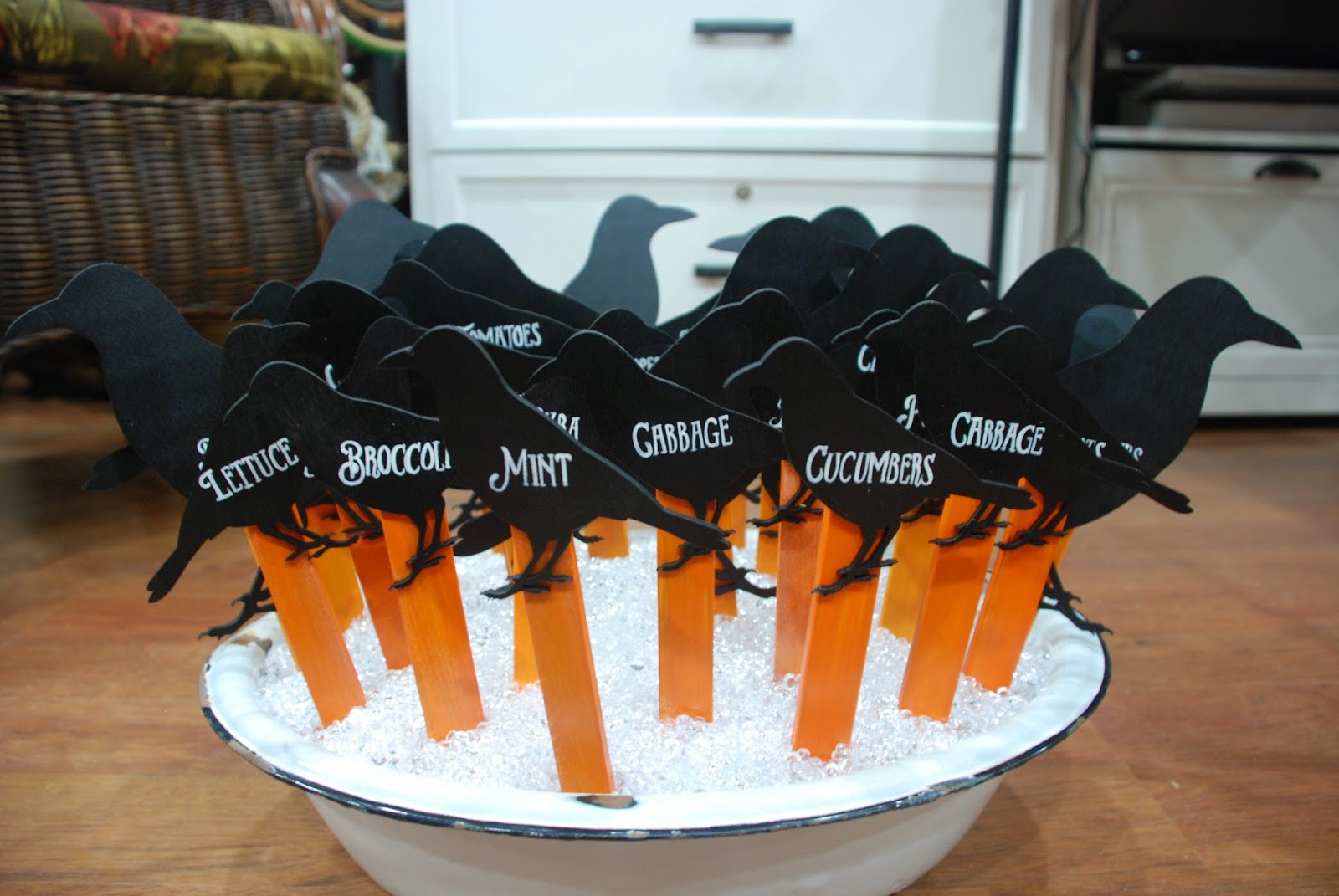 I did two different sizes, but I think they will add some cuteness around the garden. 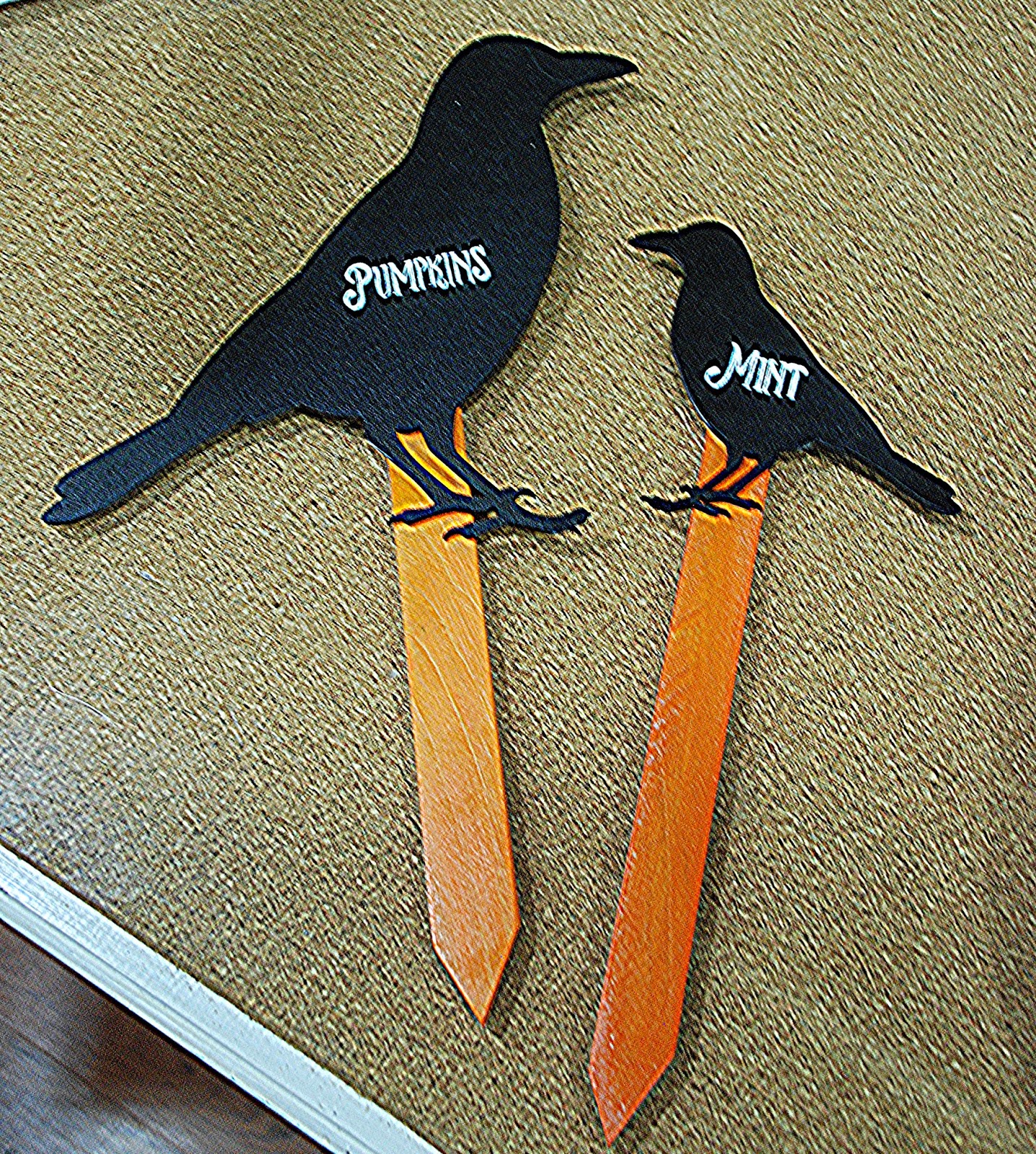 I hope you are enjoying these posts and keep checking back for updates.

Thanks for stopping by.
Debbie